A hummingbird darted past us, heading straight for the feeder by the kitchen window. The little bird hovered, tried and tried again. There was nothing. None of the flowering plants in our garden could feed him, either. The entire garden was covered in a thick, dull brown layer of reeking mud and debris. My herb garden washed away, not a speck of green, no sign of life. But wait, was that a fish I saw in our murky, smelly pool?

It was September 10 and I was back at my house for the first time since it flooded. Two weeks since water released from the nearby reservoirs pushed the Buffalo Bayou out of its banks and sent its swampy water into our streets, and into our homes. It seeped up through floors and walls before it broke through the barrier of sandbags we frantically built that morning.

The water spared none of the 158 homes in our Memorial Thicket neighborhood, one of several affected neighborhoods. On a FEMA map published in the Houston Chronicle in the weeks following the disaster, our entire area colored up dark pink: badly damaged and even dark red: destroyed.

Looking back at the weekend when our home met Harvey, this is our story.

We prepared as best we could as Harvey churned towards the Texas coast. I cooked a ton of food. Made rabbit fricassee; braised short ribs; made a black bean and smoked sausage chili; and took all day to simmer pork bone broth with lemongrass, ginger and loads of kitchen scraps. Some food went into the fridge, the rest in the freezer. Based on a tip I placed a large container with water in the freezer. It all fit snug and would keep things frozen long after any power cuts.

Hurricane Harvey made landfall in Rockport, Texas on Friday August 25. Most of the rain was expected later that weekend but it is hard to imagine what’s ahead when a hurricane category 5 makes landfall relatively close by, yet all you see is blue skies and intermittent showers. When sunshine sparkled fallen raindrops in our backyard, I jokingly remarked: “Look at that. Not even an infinity pool!”.

How I would eat my words.

Saturday night the rains picked up full force and never stopped. The sky that night was a disturbing display of dark clouds and flashing lightning. The rain ruffled on the roof like a possessed drummer.

We woke up to a flooded street, water washing around the mail box. The power was still on although internet failed — it had since Friday. But shortly after lunch, and with a big bad ‘boom’, the transformer blew and power went. We knew nobody be coming through the flooded streets to fix it. We had candles, flashlights, food and water and a second floor to stay high and dry. We could stay for days if we had to, and it looked like we just might have to. At night we reheated one of our ‘hurricane rations’, braised short ribs and polenta, outside on the gas grill. And so we dined, very well, and with a bottle of wine. 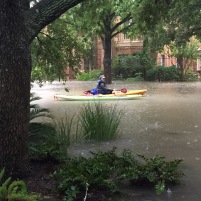 By Monday morning the water was lapping at the front door. Sleep deprived we took shovels and trash bags and started to fill ‘sandbags’. We forgot about breakfast, forgot about everything other than: keep the water out. We laughed — nervously, but still — when we saw the first flat boat come through our streets. The people on it weren’t laughing. More boats came and went. Guys in a kayak came close up, balancing well above what used to be our rock garden, and we learned the water was about to rise much higher: they continued to release water from the nearby reservoirs to ease the pressure on the dam walls. And it hit us: we were wasting time trying to keep the water out. Our neighborhood was doomed. We needed to prepare to go. And so just before 3pm, we grabbed an overnight bag and backpack with laptops, and climbed into the rescue boat that came for us, dog and all.

Huddled together in the motorized skiff, manned by two heroes from the Cajun Navy, we boated out of the flooded neighborhood where cars were submerged and roads turned into waterways. Our rescuers took us out to a shallower part on the main road where a high-clearance truck was waiting to drive us and a bunch of others to the nearest staging point. I thank-you-thank-you-thank-you-ed everyone as I waded to the humongous truck. “That’s us rednecks for ya: we come out in our boats and monster trucks and help out where needed,” said one of them, helping me clamber into the high back of the truck. I smiled at his words, knowing I would never make fun of these vehicles ever again.

Our staging point was outside the CVS on the corner of Memorial Drive and Eldridge Parkway. In the cold rain, along with everyone else rescued — including people with very young kids and elderly —  we waited. We saw neighbors, as shell-shocked as we were. We had no plan. Nobody had a plan. 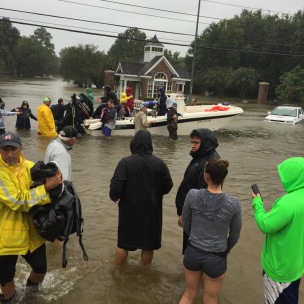 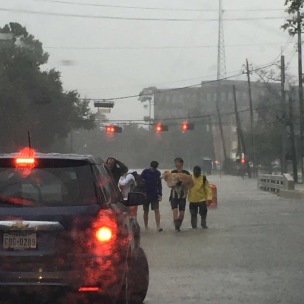 The Power of SnapChat

A video my son Mees posted on his SnapChat was picked up by a friend who told his mother: we need to go get them. Nuala called me. “I will try to get as close to you as I can.” I told her not to; it wasn’t safe to be out on the roads. But she left anyway, promising not to take any chances. It had been an hour since we arrived at the staging point, and nothing moved. Desperation began taking hold of everyone. What to do? Where to go? How to get there? A guy drove up in a flatbed truck, rallying everyone to get on it. He’d take us to a shelter. “I won’t be back, and I don’t think another truck is coming,” he warned. There were about 20-30 people, and a bunch of dogs, cats and other pets: it made for a mad rush to the flatbed. And right that moment Nuala called: “I’m here.” I couldn’t believe my ears. She was here? But where?! “See me flash my headlights?” and there it was: through the curtain of rain in the distance I saw two dimly blinking lights. We grabbed the bags off of the flatbed, hugged our neighbors goodbye and started wading across the flooded intersection to where she stood.

The smell of beef stew filled Nuala’s kitchen, and my stomach rumbled so loud I think it popped my ears. No breakfast, no lunch. “Chili Cola Beef,” Nuala said. A trusted recipe, she added, and as simple as it sounds: Thai chili sauce, a can of coke and beef.

We stayed with our lovely Irish family of seven for more than 10 days. We had no where else to go. Our cars were gone — drowned. Roads were flooded, temporary flats were unavailable, hotel rooms fully booked. My son resumed school, long before the water drained from our flooded home, “as if nothing happened”. When a 2-bedroom finally became available for us, we moved there, switched school bus and picked up a new routine. 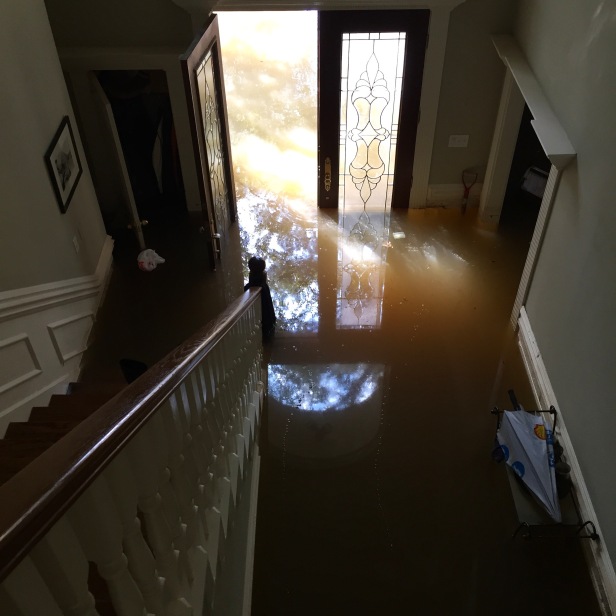 When finally the water receded on Sunday September 10, we went back.

Walking into our house it felt like entering a crime scene. Something horrible had happened here and we had to tread carefully, as if not to disturb any evidence.

The smell in the house nearly floored us. Everything was covered in a stomach-churning thick stinking mud. Furniture was toppled and damaged. The yellow leather chair, brutally quartered, lay dead and covered in black and yellow spots of mold. I grabbed tight on the mouth cover I was wearing.

The power was still off and I peered unsure into the dark smelly hole that was once my beloved pantry full of favorite kitchenware and my ‘labors of love’ like homemade pickles and preserves and vodka-infused spiced grapes. In another dark damp closet I shone my flashlight on the shoes I’d kept there. Even the ones higher up were covered in a disgusting hairy mold. I ignored the fridge and freezer, aware of what would be rotting in there.

Cleanup. A simple word that doesn’t convey the depth of desperation faced.

We marveled at some of the flooding enigmas. Like how did our massive teakwood bed float and break yet the lightweight glass cabinet remained standing, saving most of our wine glasses inside? Or how come none of the bottles in the tossed and tumbled wine fridge broke?

I cried happy tears when I found my tall bookcases still standing, keeping most of my cookbook collection above the flood line, relinquishing only the two lower shelves to the water. 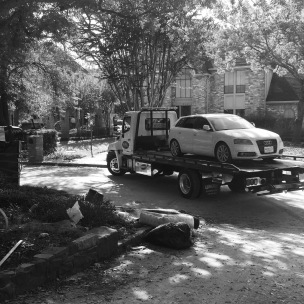 Cleanup throughout the neighborhood turned streets into narrow canyons, flanked by towering ever-growing walls of debris. The smell everywhere is simply toxic. I hug neighbors that I see on my way in, or out. It is heartbreaking to hear their stories.

We lost about 50% of our belongings, including 3 cars. Many of our neighbors lost way more than that. Most of our neighbors are homeowners. As tenants, at least we didn’t have to face the rebuilding.

The brown, smelly pool looks like a death trap—and given the e-coli levels found in the flood water, it actually is. But yes, those are fish swimming. And hey look, I see a spiky-skinned big toad paddle by. They are reminders that life, even in stagnant murky water, goes on.

dog on her island 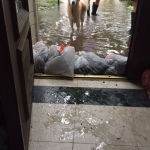 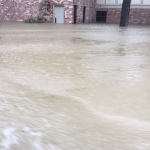 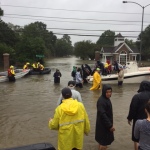 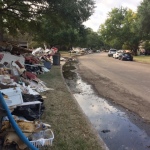 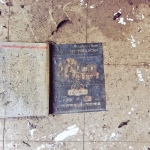 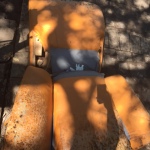 6 thoughts on “In Harvey’s Aftermath”