Imagine Italian cheese made with raw milk piped directly from the udders of Jersey cows raised on Texas pastures. Can you picture those big beautiful cow eyes staring at you as farmhands fit the teat cups? Can you smell that rich raw milk filling up the cheesemaker’s stainless steel tank? What are the odds that a native of Friuli in northern Italy would hook up with a traditional dairy farmer of Czech descent in the heartland of South-Central Texas to make cheese?

In the rolling hills of Lavaca County, in a triangle between Komensky, Moravia and Praha, near one of the oldest painted churches in Texas—St. Mary’s Church of the Assumption, a tall stone structure built in 1895—the Chaloupka family has been operating their small family dairy since 1947.

A shed with a sign that says “raw milk” is empty except for a big chiller, a table with a notebook and a cash box. Here customers can pick up raw milk along with farm-made heavy cream and artisanal cheese, all kept in the chiller. There is even raw honey from a neighboring farm, and soon maybe even olive oil from a nearby new olive grove. You sign your name in the book and leave the appropriate amount of money in the cash box. It’s an honor system—you pay for what you take.

The store is part of Four E Dairy—a family dairy farm named after farm founder Ernest Sr. and his three sons Ernest Jr., Erwin and Eugene. Chad Chaloupka—grandson of Ernest Sr. and son of Eugene and Elyse Chaloupka—is the third generation to manage the dairy farm. Holding a Texas A&M degree in dairy science, Chad Chaloupka is dedicated to sustainable dairy farming. That includes providing a natural diet on pasture, supplemented with farm-grown hay and silage.

When I visit on a hot summer day, the grass pastures are rich with wild flowers and herbs. Cows wander out to graze whenever they want but in the heat of summer prefer to chill in the freestall barn on mud-covered waterbeds. Life can be good for a dairy cow.

Andrea Cudin left his beloved Friuli, a mountainous region in northern Italy, for love. His wife, Jillian, is from Victoria, Texas, where they settled five years ago. Feeling restless and perhaps even displaced Cudin, who holds a PhD in philosophy, decided to try his hand at cheesemaking. It seemed like the natural thing to do. Cheese is in his Friuli heritage.

“Very much like Proust: the memory of the body,” the philosopher laughs. For him “the cheese is connected to all. Cheese is so important; it’s like a background noise you grow up with that you don’t even realize it’s there until it no longer is. The smell of the whey, after you make the cheese; the steam that is created in the cheese room—all of that is part of my identity, which I realized here [in Texas], not there [in Italy].”

When Cudin started out making cheese he got the raw milk from Four E Dairy. Soon Chad Chaloupka and Cudin were drawing up plans to expand the existing creamery to include a cheese plant and aging room.

Cudin named his cheese company Lira Rossa. It’s the title of a book of poems (by Guido Piovano) that brings a childhood memory for Cudin, of this book sitting on his grandfather’s desk. “There is also a twist in the meaning of ‘Lira,’” he added. “For the poet it was a musical instrument and for me it is the curd knife.”

The cheese creamery in Moulton is based on an Italian latteria turnaria, a traditional cooperation between small dairy farmers and local cheesemakers. Farmers bring in the milk, individual cheesemakers take turns using the milk to make cheese. At the turn of the 19th century throughout Friuli the communal latteria turnaria had an impactful social function but became less and less common over time. It’s one of the reasons why the international food movement Slow Food includes the latteria turnaria in its presidia program (a program aimed to preserve authentic foods and food making).

Outside the creamery the cows are filing into the barn area for their noon milking. About 60 cows an hour go through the milking process of wiping teats clean, fitting the cups, milking and then releasing. And the same thing starts again at midnight. The cows know the drill and quietly—with an occasional moo—wait their turn. 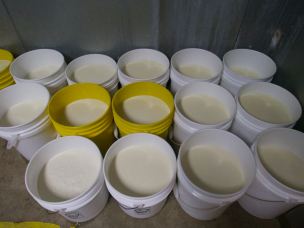 Under the raw milk and cheesemaking licensed and inspected roof of Four E Dairy, Cudin has been expanding his cheese repertoire to include mozzarella, ricotta, latteria, caciotta and typical Friuli cheese that was born from a tradition to never throw anything away: formadi frant, made with defective cheese, pressed together with herbs and spices.

In addition to fresh ricotta Cudin smokes ricotta over pecan wood to make a Texas-inspired Ricotta Affumicata. It is a hard-cheese ricotta that can be shaved or sliced, same as Lira Rossa’s Ricotta Salata (not smoked, “salata” refers to salt). Washed in red wine, the original raw milk Latteria has a “drunken” brother known as Ubriaco, a latteria with a burgundy-red rind. Caciotta is a semi-hard washed-rind cheese from central Italy. Cudin is perfecting the process, caressing his ageing Caciotta cheeses in his cheese room following the authentic method of wiping them routinely with a brine-soaked cloth.

Four years into cheesemaking, Cudin said he is only now becoming confident of the quality of his cheese: “And the more confident you get, the more you realize there is so much ahead of you.”

Note: this story was published titled Of Cows & Curds in the Fall 2017 issue of Edible Houston.