Ants, beetles, grasshoppers, scorpions—a plethora of insects (and their larvae) are eaten in countries the world over. I’ve been to markets in Hong Kong and Bangkok where fried insects (including fat, swollen silk pupae and whole fried scorpions) were as common as bundles of kai lan and bok choy. Yet in Western culture, even the thought of eating insects is often met with disgust.

A few years ago, the UN Food & Agriculture Organization (FAO) recognized that in order to meet future food demands, alternative food sources must be explored. In collaboration with Wageningen University in the Netherlands, FAO conducted a research into the viability of insects as a protein food source, which culminated in the 2013 publication Edible Insects—Future Prospects for Food and Feed Security: “To meet the food and nutrition challenges of today [..] and tomorrow, what we eat and how we produce it needs to be re-evaluated.”

The global discussion about the need to address the unsustainable demand for popular proteins like beef is zooming in on edible insects. Entomophagy, or the consumption of insects, is a hot topic—and not because it is cool to try weird foods. Easy to farm without the massive carbon footprint of conventional meats and with zero waste (you eat the whole thing), insects are also high in protein and other nutrients including calcium, iron and vitamin A.

Still, in a society that prefers its meat to be as disconnected as possible from the animal it came from—skinless, boneless, headless— critters with antennae, eyes and little legs are not likely to become a national staple. So how can we raise insects’ profile as a desirable protein?

Key is how it appears to the uninitiated. Similar to how you wouldn’t put a cow on the table for everyone to dig in, insect needs to be treated like an ingredient and prepared to make it delicious.

Insect products like protein bars, granola and crispy snacks are on the market already, like the jars of Mealworm Bolognese and Cricket Arrabiata from One Hop Kitchen. It’s part of C-fu Foods, a company founded by Cornell food science graduate Lee Cadesky and brother Eli. Cadesky developed a “cricket tofu” (c-fu) in 2014 while at the university. The sauces are made with that cricket tofu, now marketed as Textured Insect Protein (TIP). TIP can be made with any edible insect and used, for instance, to make burger patties.

My own experience with insects processed into a food product goes back to 2012 when I was at Slow Food’s international food fair. The Nordic Food Lab (the culinary research team of celebrated Chef René Redzepi at Noma restaurant in Copenhagen, Denmark) presented a grasshopper garum. It was part of their ongoing research into the “deliciousness of insects”. It tasted just like fish sauce to me. The recipe— grasshoppers, fermented pearl barley koji, filtered water and salt, all mixed in a blender and left to ferment for 10 weeks—can be found among the many documents in the Nordic Food Lab’s Bug Folio, along with other recipes like bee larvae ceviche and moth mousse.

Consumers who order and use whole or ground crickets in their home kitchens can find a host of enticing recipes, from cricket spring rolls, cheddar cricket biscuits, black bean cricket taquitos and cricket bibimbap to banana cricket bread and chocolate cricket cookies. 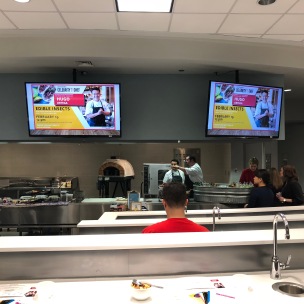 For Houston’s Chef Hugo Ortega (Hugo’s, Caracol, Xochi), entomophagy is in his blood. He grew up in the mountains near Oaxaca, Mexico, cooking with his grandmother and acquiring a natural taste for gusano, escamoles, chapulines, known in English as agave worms, ant larvae and grasshoppers. Wrapped in a handmade tortilla with a dark, spicy mole, herbs and guacamole, anything would taste good, right?

“In Pre-Columbian times, I believe the diet was quite simple, and bugs played a big role in cooking.” Chef Ortega casually nibbles on a handful of chapulines as he talks. The chef came to the University of Houston’s Conrad N. Hilton College to talk about insects in his cuisine, and to cook them for a tasting.

“The best way to cook the insect,” he said, “is a little white onion in hot oil, add the insects and finish with a little cilantro and a pinch of salt.” He rolled a spoonful of ants in the hot skillet as he talked, then dropped them in a masa tartlet and finished them with a spicy mole sauce. Behind him, students of the Hilton College plated the little ant tartlets and passed them around. Curiosity (and perhaps even drooling over the tempting-looking tartlets) won everyone over and the insect bites disappeared without a trace. The same thing happened when Chef Ortega sent out tasting plates of his chapulines tacos: roasted grasshoppers nestled in chipotle-tomatillo salsa and topped with guacamole.

“If I wanted to cook insects at home, where could I buy them?” one of the students asked the James Beard Award–winning chef. “Come to Oaxaca!” he laughed.

The full article, Exploring The Deliciousness Of Insects, was published in the Spring 2018 issue of Edible Houston